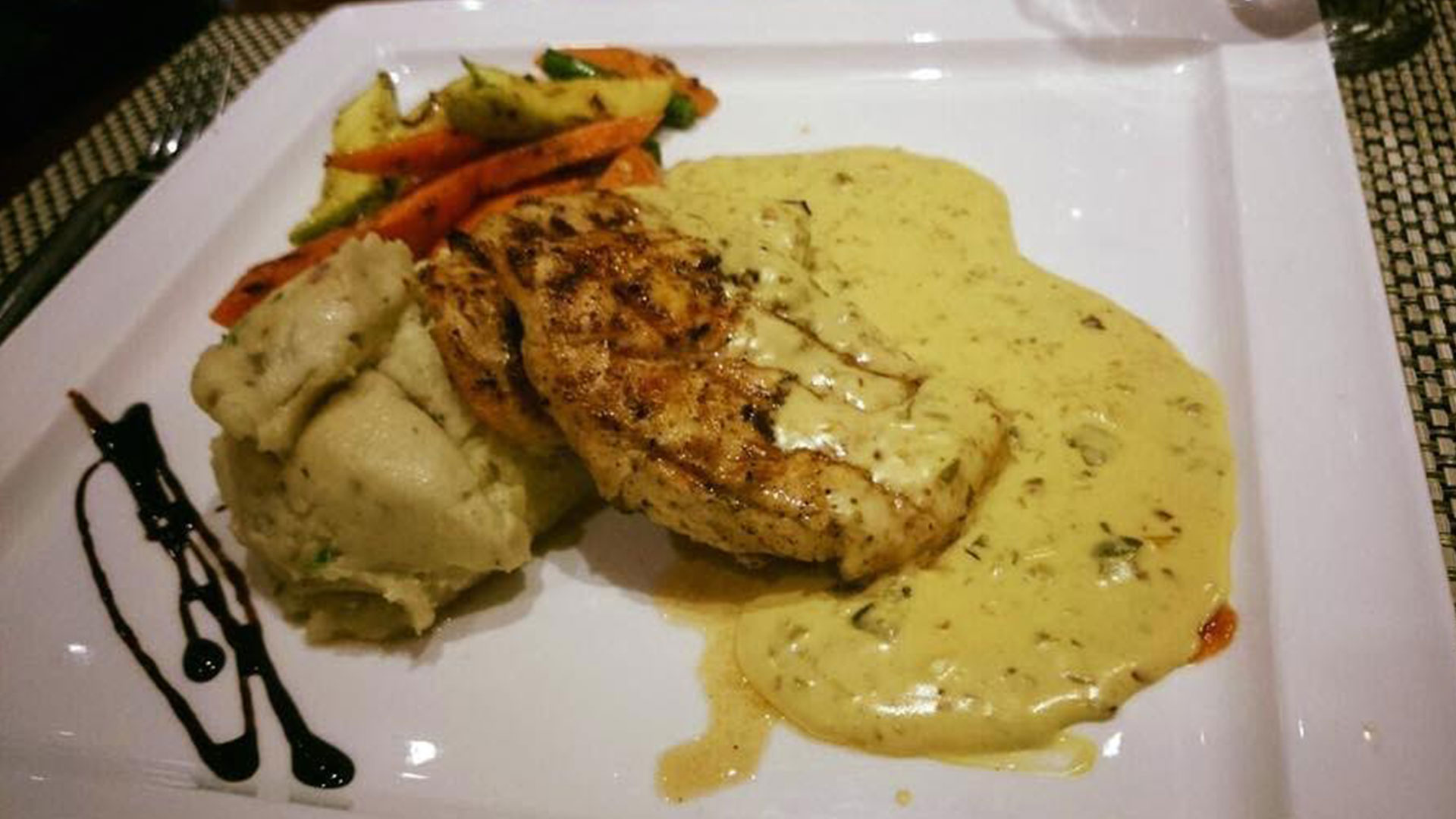 Food at 3sCrowd is serious business. It is something we talk about, constantly, all day long. People enter the office in the morning talking about what they plan on ordering for lunch, and sneaking off for an occasional snack run is not unheard of.

While there are very few rules in our office, the only one that gets you in trouble for not following it is this: the team eats together.

Whether it is the first cup of tea in the lunch room in morning, waiting for every last person’s food delivery to arrive, or even a packet of marshmallows- we do it together.

So you can imagine the levels of excitement of our (not so) little crew when we were invited for a food tasting to the newly revamped Jazz Restaurant. We had been sent the menu ahead of our visit and had spent hours discussing what we would order. As one can imagine, no work was done in the first half- the most that our team accomplished was dangerous levels of dehydration from all the preemptive drooling.

We were welcomed by a very cheerful staff. The manager was very helpful with recommendations and suggested appetizers that we would enjoy, and sent us complimentary drinks- mint margaritas and fresh juices.

The table started off with Chili Garlic Prawns, Dynamite Prawns and Semolina Crusted Calamari. I had very cleverly placed myself in a more or less central position on the table, so was able to try all of these.

The Semolina Crusted Calamari was non-fussy and simply seasoned with salt and pepper and a hint of lemon, which is exactly how you want your seafood. Dynamite Prawns, which are becoming a permanent fixture of pretty much every eatery around Lahore, were nice but forgettable- the dressing was more lemon than dynamite, but for people who prefer a milder version, it might be a good choice. Which brings me to the Chili Garlic Prawns. 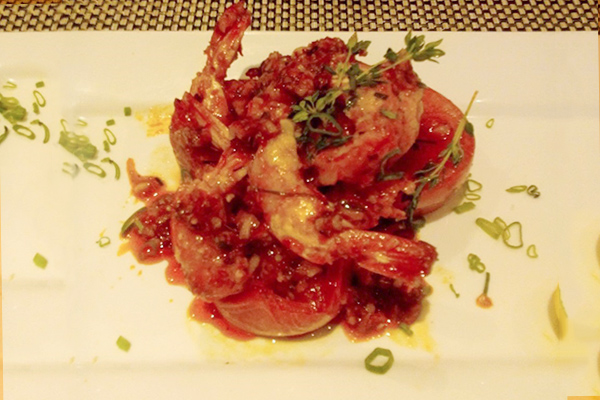 The prawns were spicy, doused in some sort of garlic-butter-chili flake-wonder-emulsion and served on a bed of halved, roasted tomatoes which were juicy and sweet- perfectly complementing the fiery prawns. It was seafood with an Italian twist, and comes highly recommended!

Moving onto the main courses (now with very with high hopes). Most of the team had gone with either the Beef Oscar Steak, Kung Pao Chicken, Jalapeno Chicken or Chicken Parmigiana- and one brave choice of going with the Baked Shrimp Pasta. Everyone who went with the Beef Oscar Steak gave immediate rave reviews. The tenderloin fillet with crab meat, and served alongside asparagus, hollandaise and béarnaise sauce as well as mashed potatoes was an instant hit. 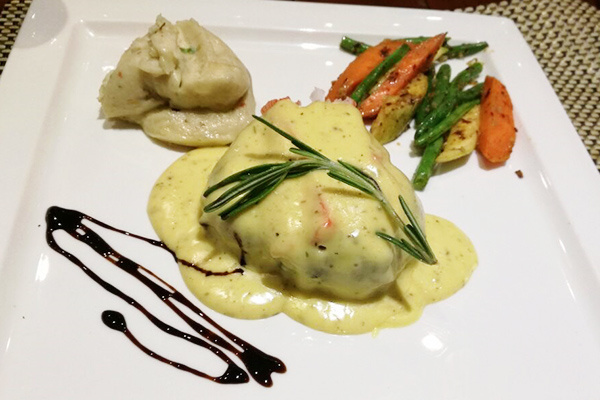 The Kung Pao chicken also went over reasonably well, and is good for those who like Chinese with a continental twist in a generous serving. 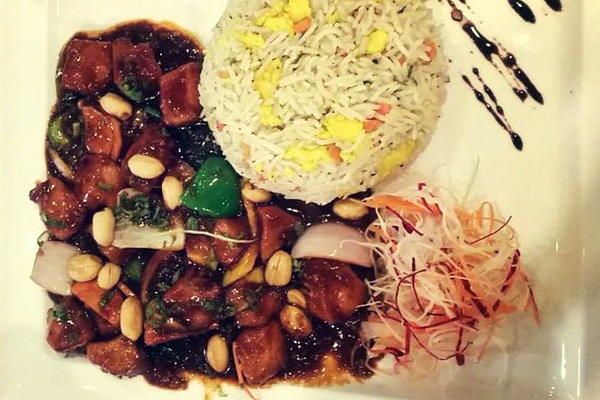 The Jalapeno Chicken was served with a creamy sauce that has a tangy jalapeno undernote instead of in-your-face spiciness. 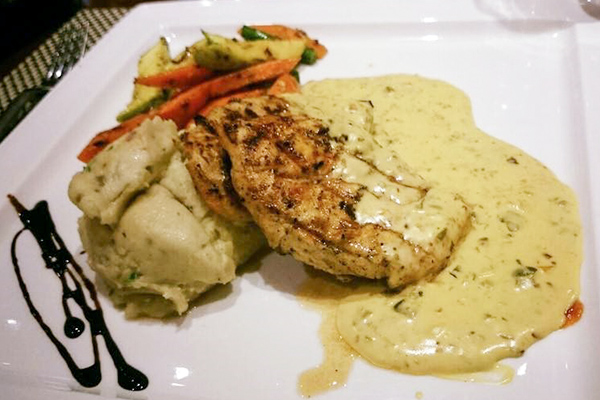 The Moroccan Chicken, grilled up and served with brown rice was perfect for those on a diet- a spicy and treat without any of the guilt. 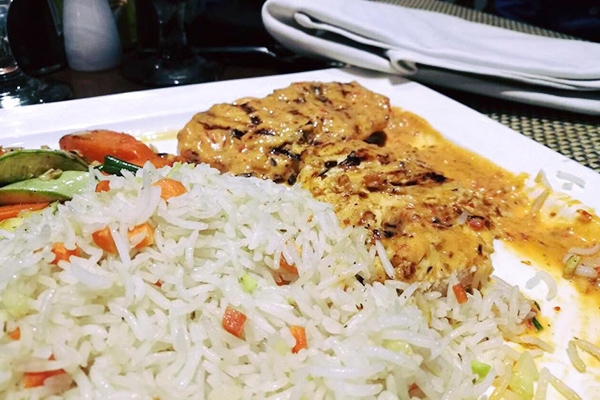 I had been in the mood for good comfort food for quite a few days so I had gone with the straightforward yet promising Chicken Parmigiana- and was not disappointed. Crispy breaded chicken breasts, slathered in gooey cheese and served on a bed of spaghetti, the dish could have veered into the dangerous territory of being too dense and heavy, but was rescued by the most vibrant marinara sauce. None of that store-bought or ketchup-y kind- this marinara sauce tasted of fresh tomato and was perfectly seasoned. 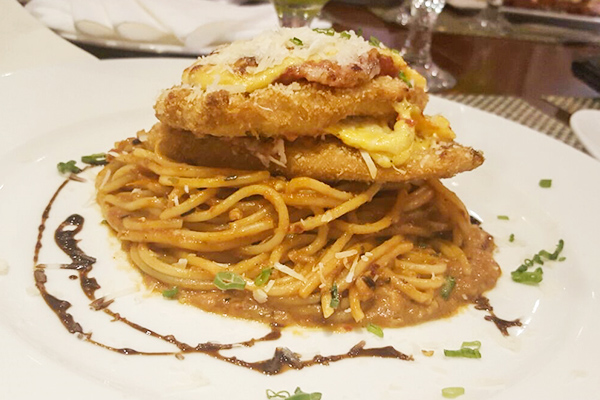 While I was still internally debating whether I could unbutton my jeans without being noticed, the waiters arrived with a sight that immediately caught everyone’s attention: steaming hot dessert.

We got our hands on both the Chocolate Bread and Butter Pudding and Molten Chocolate Lava Cake, and believe me, not one crumb of either was left, even though moments earlier we had all agreed that we were full to bursting.

The Chocolate Bread and Butter Pudding tasted like a hybrid of classic English fruit cake and bread and butter pudding, which makes it an acquired taste but is sure to win over many loyalists for life. 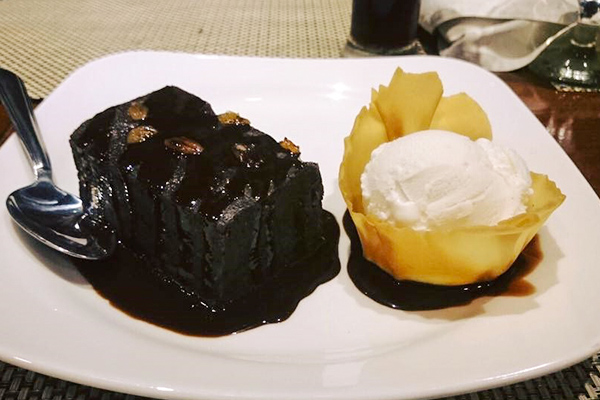 Now, the Grand Finale- the Molten Chocolate Lava Cake. We all know the disappointment that comes from a dry Molten Lava cake- people tell me that it is the highest breach of trust at any eatery, and one to turn you off from even your favorite dessert place.

Well, you won’t find that kind of betrayal here! Break through the sugary crust of the Lava Cake and your plate is flooded with the most decadent, warm chocolate filling. 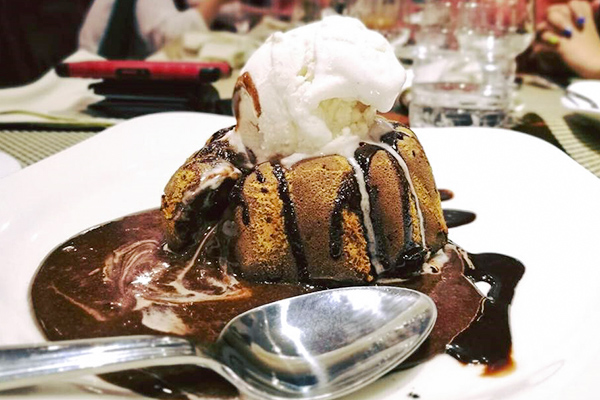 It was a delightful end to an already excellent meal, and we could barely walk back to the cars once we were done. Needless to say, more than half the team collapsed the second we reached the office, and one of us actually fell asleep on the way back from Jazz Restaurant. The remaining workday was spent lazily reminiscing about the meal we had just had, and repeatedly viewing of the slow-motion video we had made of the Molten Chocolate Lava Cake being dismembered.